The Western Paraná State University - Unioeste, aims to be increasingly recognized as an institution that disseminates knowledge and services to our state and nation.
WESTERN PARANÁ STATE UNIVERSITY DATA

Unioeste is located in the most strategic connection between the Atlantic and Pacific Oceans in South America. Situated in a prosperous, puissant and privileged region of the Brazilian state of Paraná, amidst the states of Santa Catarina and Mato Grosso do Sul, is also neighboring the Argentinian province of Misiones and the Paraguayan departments of Canindeyú and Alto Paraná. Western Paraná is also home of a World Heritage and one of the Seven Natural Wonders of the World – the Iguassu National Park and the Iguassu Falls, the Itaipú Hydroelectric Dam and the Itaipú Lake.

This region is characterized by its diverse population, results of a series of  miscegenation between Portuguese and Spaniards settlers, native Indians and African slaves along with the second migratory wave occurred by Germans, Italians, Poles, Japanese, Ukrainian, Austrian, Hungarian, Slav, English, Spaniards, Syrians, Lebanese, Chinese and Swiss. Nowadays, it is also possible to encounter fellow Argentinians, Paraguayans, Bolivians and Haitians living here. 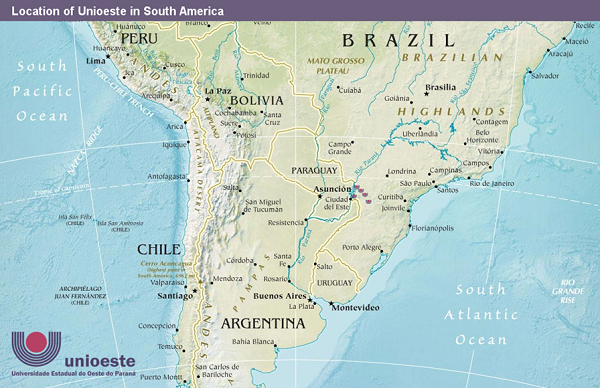